Because relative pitch is the essential thing in musicality, I should have developed such an indicator in the first place. The idea that you cannot acquire absolute pitch after a certain age, is in my opinion not helpful in improving one's musicality. Therefore, the idea of taking away the mystique of perfect pitch arose. But only after developing a continuous absolute pitch indicator did I realized that the advantages of having a similar indicator for relative pitch, is too.

There are numerous interval test programs that can tell you how many out of a certain number of  intervals you've guessed correctly. Isn’t that good enough? After all, you get enough feedback to continue your training and improve your percentage ratio.

In most cases, the feedback is very helpful, because you know that the percentage was for a particular interval or intervals. For example, you may have tested major thirds, perfect fifths, or a combination of both. Or, in the best case, you do a test of all intervals. While such a percentage provides an overall view of relative pitch, it is not useful for beginners. Beginners are better off receiving feedback on specific intervals. This allows them to train specifically on those intervals where they need improvement. More importantly, they can better track their progress.

Interval Precision
What exactly is relative pitch? To identify an interval, you must recognize pitch distances. That is, you must recognize that the tonal distance between a minor third and a major third is smaller. However, if you think that smaller distances are more difficult to recognize than larger distances, then you are wrong. This lies in the relationship between tones and overtone creation. Normal tones will always create overtones, and these overtones follow a simple pattern: the path of least resistance. If you pluck a string, the string will start to vibrate with its fundamental frequency. The first overtone that gets generated is always the octave and its wavelength corresponds to half the length of the string. In other words, the wavelength fits twice within the original length. The next overtone is the perfect fifth and its wavelength fits three times within the original length. Now, since the first overtone is an octave, we also hear a perfect fourth, since the perfect fourth is the inverse interval of the perfect fifth. For more information on this topic, see my video: Absolute and relative pitch – inside our methods.

In this way, pitch distance discrimination has two components: the tonal distance and the overtone relationship. While for the octave, the distance is usually the main identifier, for the perfect fifth and the perfect fourth, the overtone relationship makes the distinguishing process difficult. In fact, for most people distinguishing perfect fourths and perfect fifths is an extremely difficult task. Therefore, for learning purposes, it makes sense to follow an interval training pattern.

However, as a general measure we should still use pitch distance alone as the relative pitch indicator. How do we describe the difference between someone who has “a good sense” and someone that has “an excellence sense” of relative pitch? To answer this question, we have to go deeper – beyond the precision of half-steps. That is, we must measure pitch distance deviations. In this way, measuring pitch distance is the only way to determine relative pitch discrimination ability.

Music system independence
When we speak of relative pitch, we usually mean intervals in the equal-tempered system. Thus, one must know the interval names of this system. However, there exist other music systems around the world. Furthermore, people without a musical education can also discriminate pitch distances; they just cannot name the intervals because they lack basic music theory.

Since all music systems recognize the octave, dividing the octave into equal small steps makes it possible to measure pitch distances. In the equal-tempered system, the octave is divided into 1,200 small steps. A half-step, then, consists of 100 such small steps. In the equal-tempered system, deviations from standard frequencies is given in cents. Therefore, one small step equals 1 cent. For the remainder of this post I will use the term "cents" for pitch distance statements.

This music system independence allows for the measurement of general pitch distance and is thus suited for a general relative pitch indicator.

Idea and development
If we want to measure and quantify relative pitch, we must first identify the main quality of relative pitch. When I developed the absolute pitch indicator, I started with the assumption that everybody has absolute pitch, but some are just better than others. So, all we have to do is find a continuous measure to describe that ability. Since most people do not have absolute pitch, I have to bring them into a framework where I can say, "You have this degree of absolute pitch." Therefore, I did loosen the definition of absolute pitch. For example, if someone is never more than a half-step off from the correct answer, then this person – in my system – has absolute pitch. This assumes the absolute pitch test would be done only with whole-steps instead of half-steps. If we go even further in loosening the required recognition precision – to an octave, for example – then we can grade all possessors of non-absolute pitch. But I can also go in the other direction by defining perfect pitch as the ability to discriminate pitches by a third of a half-step. That is, there are now 36 tones to identify in an octave. A sample answer for a tested tone, then, would be "This is an 'A' plus a third of a half-step.” Now some people who have absolute pitch according to the current perceived meaning of absolute pitch would start to fail the test for the narrower definition. If we were to go even further by accepting deviations of only fractions of a cent, then at some point everybody would fail the test (e.g., if you must be able to express tones to a precision of 0.1 cent – such as: this is an “'A' plus 34.7 cents.“). For absolute pitch, measuring accuracy is, in my opinion, not the most relevant criterion, so, I decided to keep accuracy at a fixed level, and use the retention-time as the unit for the indicator. Nevertheless, the loosening of the accuracy was the first step toward the absolute pitch indicator.

Using a similar approach for a relative pitch indicator, I will start by testing to see if one can successfully identify large pitch distances. In this way, I can already start to grade people with a poor sense of relative pitch. In addition, I will take the tested range and measure the answering speed. This allows me to grade even more precisely. Going beyond the precision of half-steps in the grading lets you see your “cushion” and gives you confidence. Therefore, the main criterion will be the pitch distance, and the unit of the relative pitch meter will be cents. For example, if you are able to identify pitch distances to a third of a half step, then your relative pitch indicator is 33 cents. In other words, you can differentiate an interval from another interval that deviates by a third of a half step.

When I introduced the program listening-ear-trainer (March 2013), I also added – as a by-product – a learning box for intervals. Instead of absolute pitches, intervals are used as the “words” to memorize. A learning box is usually used for vocabulary training. Since, listening-ear-trainer is a training program, it is not suited for an evaluation test. Moreover, it is limited to pitch distances of a half-step.

So, after introducing the absolute pitch indicator, the idea for a general indicator for relative pitch was born. It is important to note that both indicators are independent of any particular music system and that the programs can also be used by non-musicians to grade them-self. This feature makes it easy to evaluate the success rate of any training program. Before releasing the program Pitch Grid Test (October 2018), I introduced the program PitchBlitz (June 2018), which is based on the same grid layout as the test but has additional training options. The test returns a continuous indicator for the relative pitch ability expressed in cents. 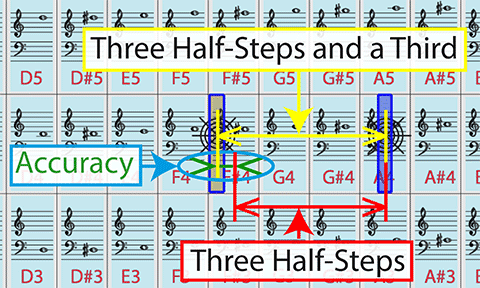 Relative pitch tests can be done in two ways: harmonically or melodically. In a harmonically played interval, both notes are played simultaneously. In a melodically played interval, the notes are played one after the other. Harmonic intervals are simpler to test, since no melodic time delay has to be defined. Furthermore, in the melodic interval test, an additional component comes into play: The participant must keep the reference tone in mind until the second note is played. However, since relative pitch recognition also implies melodic intervals, and the main distinction between absolute and relative pitch is the presence of a reference tone, I prefer to use a separate distinguished reference tone for the test.

In addition to the pitch discrimination precision, the maximum time used to answer is also measured.

The result of the relative pitch test is expressed in cents as the amount of deviation you are still able to recognize.

The test procedure
To avoid side effects, the test should use (pure) sinus waves. In addition, pitch distance deviations should be created by calculating the appropriate frequencies. Human interactions would not be precise enough. Therefore the test can only be performed using a computer.

The test procedure is as follows: