Same Pitch, Please
In the last blog post, I wrote about demystifying perfect pitch (or absolute pitch). Instead of fighting for or against myths about perfect pitch, I proposed a scientific way to measure one’s achievement toward perfect pitch. The post reduced the scope and focused only on one aspect of perfect pitch: the ability to produce a desired pitch without a reference tone.

While this is probably the most important aspect of perfect pitch – conceptualizing a tone with your “inner ear” – the proposed measurement method is no indicator of your musicality, nor is the possession of absolute pitch.

Musicality is based on harmony. Harmony can only exist if the tones relative to each other are in a harmonic relationship. Therefore, I emphasize the importance of relative pitch. Here's my standard example: if an old organ in a church is not tuned to equal-tempered frequencies, then you must adapt to this situation, since you cannot retune the old organ. Equal-tempered frequencies have no relevance in this situation.

So, absolute pitch is more or less useless, except for giving you anchor pitches. But, then, why is it so common in musicality discussions? Because it means that you can hear a melody with your “inner ear” simply by reading sheet music. Here, “inner ear” is the key word as well as the reason why I have developed the program SamePitchPlease. SamePitchPlease is a training program that focuses on this very aspect: conceptualizing a tone with your “inner ear.” So, the main goal of SamePitchPlease has more to do with keeping a reference tone in mind than with acquiring absolute pitch. To help improve your musicality, SamePitchPlease assists you with finding the reference tones you can remember best and challenges your pitch memory. 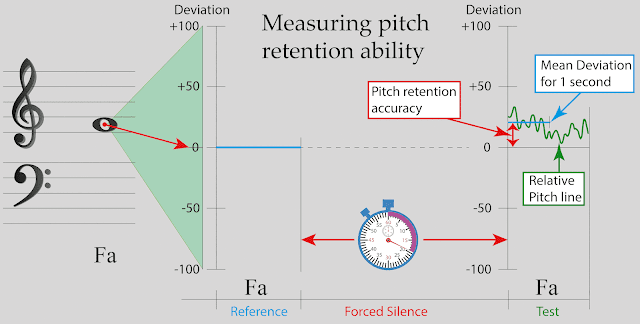 SamePitchPlease measures deviations from the reference tone after a specified silence period. Deviations are always relative to a reference. But this use of "relative pitch" has almost nothing to do with the term "relative pitch" as used in music. Relative pitch in music refers to identifying the interval between two notes.

Easy! In a test, just present some intervals and calculate the percentage of correct answers. Is such a percentage score useful? Of course, if this percentage increases in later tests, then you know you've made progress.

But, we could have done the same for absolute pitch tests. If, in an absolute pitch test, the percentage of correct notes identified increases compared to the previous test, then you've made progress. So, I could have stopped researching the subject. However, since a mere percentage score does not really help you make systematic progress, I tried to investigate the core ability needed for absolute pitch: pitch memory. Measuring and giving feedback for this quality allows for systematic progress by helping you find your current limit and sense the critical shortcomings. Then, it aids you with finding the tones you can keep in mind for the longest period of time. Try to figure out what sensations are responsible for the tones you have success with over the longest period of time. Finally, apply your findings to other tones.

The same is true for relative pitch tests. A general test that assesses perfect, major, and minor intervals and assigns a percentage score is not very helpful in improving your relative pitch identification ability. To speed up progress, more detailed feedback is necessary. Splitting up the test into categories for interval pairs, such as testing minor second vs. major second, eases the learning progress. A step-by-step learning approach is a far better method than trying to improve your ability through an un-guided overall evaluation score. By undertaking such tests, you will find that some interval pairs are more prone to confusion than others. One such a pair is the perfect fourth and the perfect fifth. For this reason, I recommend first learning to differentiate the perfect fifth from the perfect fourth. See my YouTube video: Absolute and Relative Pitch - Inside our Methods.

At this point, our discussion is already deep into a musical system, in this case the Western equal-tempered system. However, pitch ability is independent of any specific system. So, what should we look for to define a measurement for relative pitch ability?

Let's start with someone who possesses relative pitch. A person with good relative pitch can identify all intervals in an octave as well as spell interval names for compound intervals (= intervals larger than an octave). That is, such a person can hear pitch distances to the precision of one half-step.

Now, in real life, there are slides and bends that do not start or end on an equal-tempered frequency. Yet, a person with very good relative pitch ability can nonetheless name such deviations. Naturally, a person that can recognize pitch distances beyond half-steps should be given a better grade.

So, to assess someone’s relative pitch ability, we can measure their pitch-distance recognition accuracy. Pitch-distance accuracy is independent of a music system. The Western music system introduced the term "cents" to describe pitch distances. In the equal-tempered system, the octave is divided into 12 half-steps, and each half-step has a distance of 100 cents from one note to the next. All music systems know the octave as a divider for the pitch room. Therefore, for scientific calculations, we can use this unit in all music systems to name pitch distances.

Microtonality and Larger Intervals
Wikipedia defines micro tonality as follows: "Microtonal music or microtonality is the use in music of microtones—intervals smaller than a semitone, also called 'microintervals'. " (A semitone equals one half-step.) 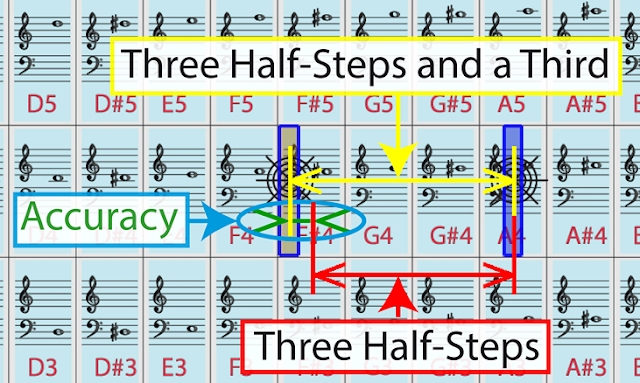 Picture: Microtonality expressed with a grid resolution of 33 cents.

Thus, we can grade relative pitch ability through one's pitch-distance-discrimination ability. Measuring this ability and receiving feedback can therefore help improve your ability.

The Pitch Grid Test uses this measuring approach and starts by testing whether one can discriminate large pitch distances. The first test starts with a pitch distance of an octave. With a little training, everybody should pass this test. In this way, everybody gets an initial score. From there, the test continues with smaller interval distances: six half-steps, three half-steps, two half-steps, and finally, one half-step. But the test does not stop when it reaches a half-step. By making the resolution even finer than a half-step, we can grade even relative pitch possessors. Thus, the test verifies one’s relative pitch ability and illustrates the path for improvement.

The Program PitchBlitz
Since relative pitch also includes compound intervals – that is, intervals that are larger than an octave – beginners face difficulties if the test is conducted with a range of several octaves. Large pitch distances increase the probability of errors for small-distance deviations. Using the analogy of measuring the physical distances of two points, we can say that measuring a distance with a precision of one millimeter is much easier if the distance is less than one meter; for distances above a kilometre, such precision can only be reached with advanced technology.

Applying this knowledge to pitch-distance learning gave rise to the development of the program PitchBlitz.

The program PitchBlitz, allows you to narrow down the tested range by letting you select the octave(s) you want to train. Additionally, PitchBlitz also offers other options. For example, people often try to solve relative pitch problems with absolute pitch skills. Since they usually don't possess absolute pitch, it turns into more of a guessing game. Let me explain:

Because you hear the note to identify after the reference tone, many people think they can forget about the reference tone and simply build the answer from the last tone they heard. They ignore the information of the reference tone. Since the Pitch Grid Test presents the notes in a grid, this layout can easily be misinterpreted as an invitation to select the note to identify through absolute pitch skills. Therefore, the training program PitchBlitz has an option that forces you to focus on distances: you must select a distance instead of a note in the grid.

The goal of improving one’s sense of relative pitch is to automate interval recognition. If you want to automate something, speed is everything. Therefore, the Pitch Grid Test evaluates your answering speed. By incorporating answer speed into the score, the evaluation lets you also see your progress in speed. In this way, you can observe small progress. That's why the training program was named PitchBlitz.

Conclusion
The term “having a good relative ear” is not very precise. To improve an ability, you need better feedback: feedback that measures your current standing. The measurement of pitch-distance recognition ability is independent of a music system. Therefore, the measurement does not stop at the distance of a half-step. And if you haven’t reached the precision of a half-step, the measurement shows you how far away you are from that goal.

A general test to measure one’s distance-hearing ability requires some time. However, you cannot compare this effort to a loudness and frequency-response measurement. Pitch-distance recognition is not limited by physical circumstances. Assuming you can hear all the tones between C2 and C6, it is a mental ability and can therefore be trained and improved. If the feedback you get from the test is precise and informative, it can be directly used to improve your ability.

The presented Pitch Grid Test and the related training program PitchBlitz are based on a grid that has its roots in the equal-tempered system. Despite looking like an absolute pitch test, it is a relative pitch test and is independent of a music system. The universally usable unit of “cents” is used to measure pitch-distance recognition.

Especially for beginners, the possibility to see the progress of one’s pitch-distance hearing ability is a motivation to continue ear training. The test offers beginners having difficulty getting started with interval identification simple-to-understand feedback. Even low-precision detection ability can be assessed. And, with training, you can observe even slight progress (fewer errors, faster answer times, using forced distance naming, etc.).

The confidence-building is further supported by neutral feedback from a computer, which eliminates the need for a second person, and means errors during the journey to success are allowed without other personal involvement.

Feedback is the only way to improve your abilities. Reaching a precision of a half-step reflects a high grade, but it also lets you know you can improve beyond this mark.

Please leave feedback and let me know what you think about this proposal.